Last night I got the chance to see something I’ve never seen before.

Broad Street was packed! It took about a half-hour to move just three block to get to the Kimmel Center.

At the corner of Broad and Spruce was a large metal ball suspended from a crane. The crowd waited expectantly as dark set in. People were standing in windows and on top of buildings to see the show. And as the night approached, the acrobats slowly climbed into the ball. One began ringing a large bell. It was like wind chimes preparing us for something from another world.

Slowly the ball began to rise from the street, percussion musicians suspended above from its edges. They hung like Christmas tree ornaments, lit up in the dusk while they took on their crazy characters. The acrobats were perched up above them, and the musicians played different chimes and bell sounds along with drums to keep the wonderfully strange pace. As the performance went on, the ball opened from the bottom like a flower, a musician on the end of each petal. Then it spun like a merry go round, or a Christmas decoration that spins under an open flame.

The musicians continued to play until the acrobats began their incredible show, gracefully showing their balletic strength. Later they moved mechanically like dolls, dancing on top of the music box. They were lit with spotlights from the bottom, casting their shadows on the high rises on Broad Street. As they moved, we moved, to another time.

The whole performance was gorgeously magical, stylish and wild. I heard a woman next to me say that it made Philadelphia proud, and I believe she was right. PIFA ended their festival with the perfect modern influence of old world French artistry. Bravi. 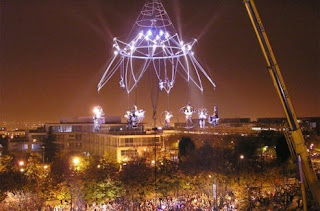