Last year in Stockholm one of my most au-courant friends brought me along to a special show at the Södra Teatern – the “Hootchy Kootchy Club.” And soon after I found that PUB, one of the main department stores in downtown Stockholm, had a special “Poom-Poom Room” selling lingerie and fetish clothing and accessories. Not too much later I was glued to Dita von Teese on YouTube and thinking that stripper was a four-letter word. This was beautiful. This was art.

When going through PIFA shows deciding which to attend, I was thrilled to see that the World Café was presenting The Peek-A-Boo Revue. This troupe of 22 artists has been in business for 13 years. I tracked down their Artist Director, Lulu Lollipop, who’s excitement for the show could be as habit forming as sugar. She describes the company as a classic vaudevillian neo-burlesque troupe and promises more variety than just strip tease. Their lineup includes 22 artists including dancers, singers, sketch comediens, two hosts, and a 9 piece band.  “You can bring your wife,” she added.

One of the things that sold me most on Peek-A-Boo was that they have their own band. Some shows I’ve seen in New York and Stockholm only use pre-recorded music, but Peek-A-Boo’s Strip Tease Orchestra provides the soundtrack, as it should be. The musicians are led by Buzz Mouthpiece, who is writing and arranging an opening number specifically for this show, called “Je Ne Sais Qui”. Plus Buzz is arranging Gilbert Becaud’s song “Quand Tu Danses” for the band, which will be sung by Vic Hardo.

Video of the whole troupe

This show will be 1910-1940 Paris themed as is PIFA’s mantra, but very much for modern day. It will include some of the French classics, but jazzed up for modern day. Many of the acts poke fun at current events. And there is one common theme – almost every performer winds up with their clothes off.  Lulu informed me that all the chorus girls in the show are trained dancers, freelancers working in many different dance troupes around the area. And the performers include women and men. Good news for what should be an eclectic crowd.

If you’ve ever witnessed the intricacies of Burlesque attire you know that they are elegant, beautiful, and surprising, and with a good performance, it makes revealing the human body as natural as singing in the shower…but much more exciting.

The show is an hour and a half long with one 15 minute intermission.

To see the entire troupe, visit the Peek-A-Boo Review at
http://peekaboorevue.com/ 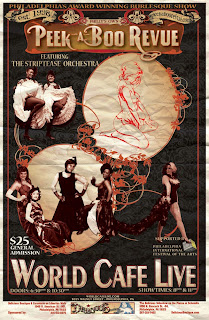 p.s. And for you aspiring dancers out there, Lulu runs a burlesque dance class at Studio Noir…www.studionoirfinishingschool.com